Too many people mistakenly assume marriage is a “meet in the middle” proposition, an arrangement in which two people fulfill their half of a “bargain,” relying on the other to do his or her part, as well.  Sounds logical, doesn’t it? 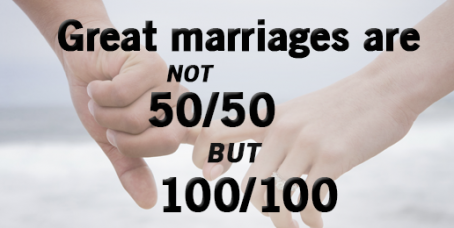 If marriage were a business arrangement, then such a process just might work.  But it’s not.  Nor would we want it to be.

A business contract is a cold impersonal agreement made with the presumption that each party might fail to fulfill his responsibilities if not for a legally binding pact.  It is a loveless pledge which bears no resemblance to the covenant made between two people who have vowed to “have and to hold” through every trial of life.

If a couple endeavors to found a marriage upon such terms, it will be a bitter ordeal, and they will seek to end it long before their fulfillment of the vow “til death do us part.”

The podcast is approximately 10 minutes. For more, visit www.HeartfeltMarriage.com