Whose idea was marriage, anyway?

When and where did marriage begin? And whose idea was it, anyway?

Marriage began in the Garden of Eden when “God put the Man into a deep sleep. As he slept He removed one of his ribs and replaced it with flesh. God used the rib to make Woman…” (Genesis 2:21-22) As soon as Adam’s divine anesthesia wore off, the Father of the bride, God himself presented the Woman to the man. She was made by the hand of God specifically for Adam, and some say God made some very nice improvements! 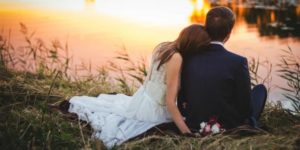 God was the first Father to give away the bride! The podcast is approximately 10 minutes.

An expanded version of the information in this podcast can be found in Dr. Ross’ book “Seven Assumptions about Marriage” on Amazon.com.

Seven Assumptions about Marriage – Assumption #1 The Origin of Marriage